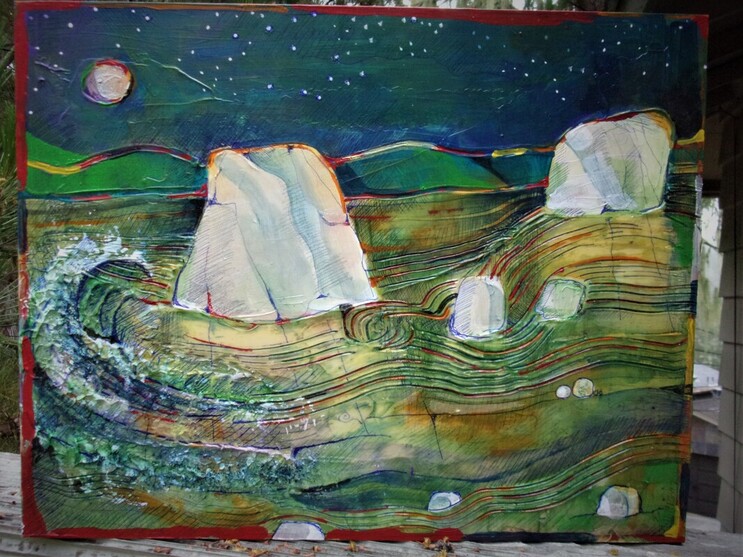 "the bergs of Iceland melt in waves of fire..."
~Finnegans Wake

acrylic, collage and pastels
painted from a dream
​{please see in the finished form on page one} 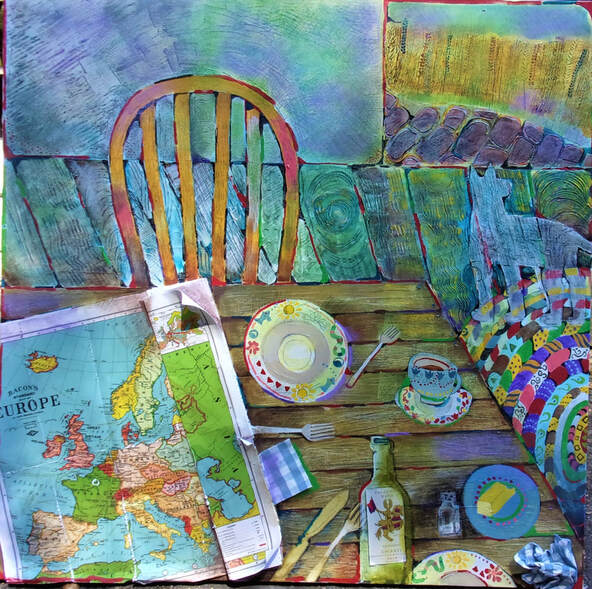 I will be in Dublin, Ireland to give a presentation at the James Joyce Symposium, Bloomsday, 2022.  It is the year that Ulysses turns 100!  If COVID permits I will present digital images of 10 paintings I have done over the past 7 years, from Ulysses, one of Lucia Joyce's pony, (which she never got), and one collage of the kitchen table in the James Joyce home when the family is preparing to move to Paris. 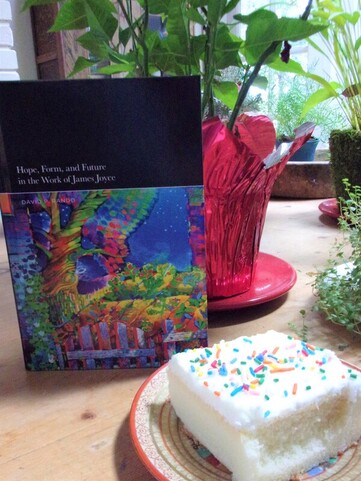 
"Their dog ambled about a bank of dwindling sand, trotting, sniffing on all sides.  Looking for something lost in a past life. Suddenly he made off like a bounding hare, ears flung back, chasing the shadow of a lowskimming gull."
~ to be painted in early 2022 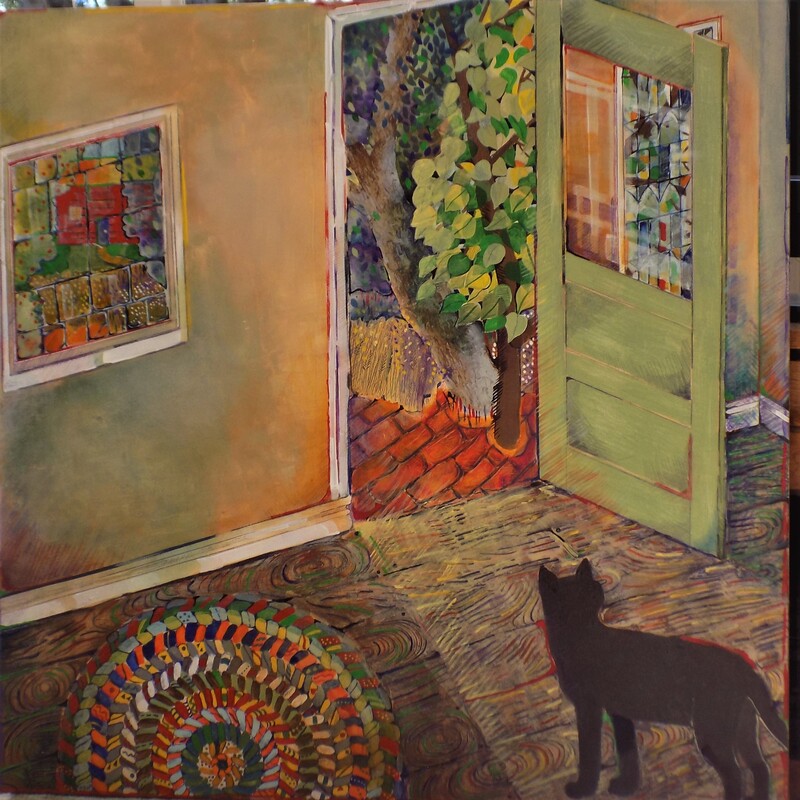 there are now five different versions of the cat and the green door, from Ulysses.  Please see column one for the others.  Only one is still available as of Christmas Eve 2021


a photo of this painting about 3/4 completed.  I started it at Three Rivers, CA on vacation.  David Rando and I, and 2 folks who were consulting with us, were working all that week on the painting for the upcoming book cover (see below).  Paul and I also had considerable work and some anxiety........... the two little red tailed hawk fledgelings that had fallen from a very high tree.  The door pictured in this painting, which is from a quote in Ulysses, is the screen door one of the birds caught his feet in and was hanging upside down. We were able to rescue them thankfully, by contacting wildlife rescue folks in and near Three rivers after a few harrowing days observing them.

​
​"........flashing in their mocking mirrors the obscure soul of the world, a darkness shining in brightness which brightness could not comprehend." 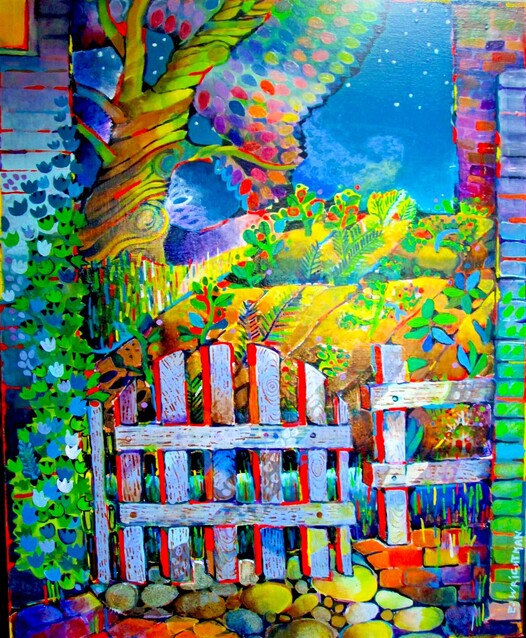 ​
Into the Penumbra of the Garden
Acrylic on canvas
Dimensions: 30x24"

"What spectacle confronted them when they, first the host, then the guest, emerged silently, doubly dark, from obscurity by a passage from the rere of the house into the penumbra of the garden?
the heaventree of stars hung with humid nightblue fruit."

Ulysses
~James Joyce
"I have not read a work of literature for several years.  My head is full of pebbles and rubbish and broken matches and bits of glass picked up 'most everywhere'.  The task I set myself technically in writing a book from eighteen different points of view and in as many styles, all apparently unknown or undiscovered by my fellow tradesmen, that and the nature of the legend chosen would be enough to upset anyone's mental balance.  I want to finish the book and try to settle on my entangled material affairs-----after that I want a good long rest in which to forget Ulysses completely."

"An unspoken remembered conversation with a horse whose name had been Joseph...."
sold
dimensions: 21x24" 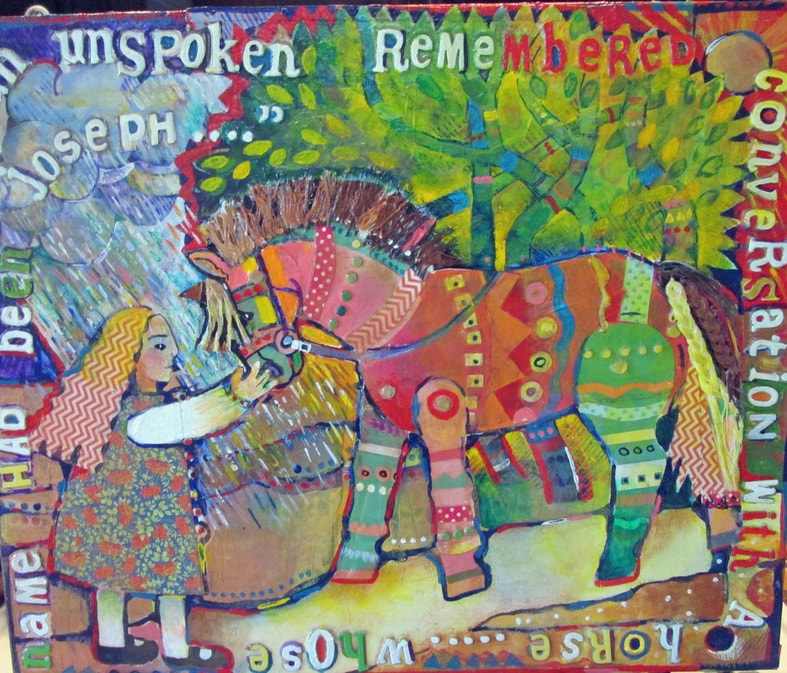 see below}
-Title: "A spear by which a horrible and dreadful dragon was smitten........"
~Ulysses
James Joyce
​

-Acrylic and collage on canvas
-Dimensions: on the small side, for me
dimensions 24x30"
pictured below this pony}
​sold to collector 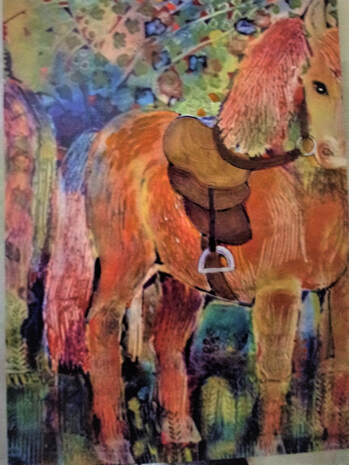 "When she lived at Bray Lucia wanted to get a pony."


~ to Dance in the Wake
Carol Schloss

[Lucia never got the pony.  I am certain that the pony would have tried to be an ally, if one is feeling* lost in a trackless wood......]

*As we all may at any given point in time. 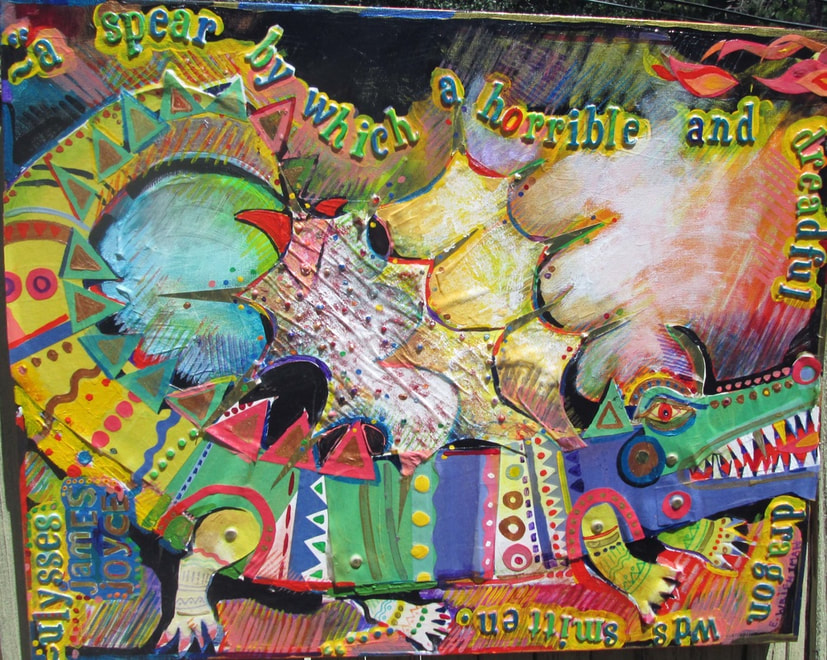 acrylic/collage on canvas
Dimensions: 36x36"
number 5 of the Ulysses paintings
Our exhibition at Pacific grove Art Center opens September 2, 2016; Echoes of Play and Peace.  Paul will be showing his acrylic on canvas works of night landscapes in the Sierra Nevada and Big Sur.  I will have about 20 works of Irish literature including the James Joyce paintings of the past 7 months!*  Please join us at the reception for a glass of wine and Amy's wonderful  Celtic harp music. 7-9:00pm. 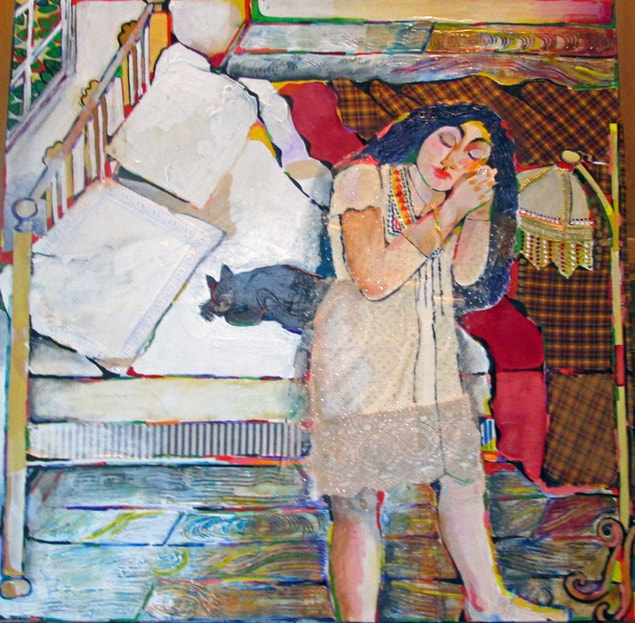 "At first he thought of constructing the chapter out of a series of lectures written by Molly Bloom, but he soon saw that it must be a female monologue to balance Stephen's male monologue earlier in the book.  to make sure that he could handle her childhood and adolescence on Gibraltar, Joyce read all he could find about the island.  The result was that when he met a man from Gibraltar later, he was so well informed that the man refused to believe Joyce had never set foot there." 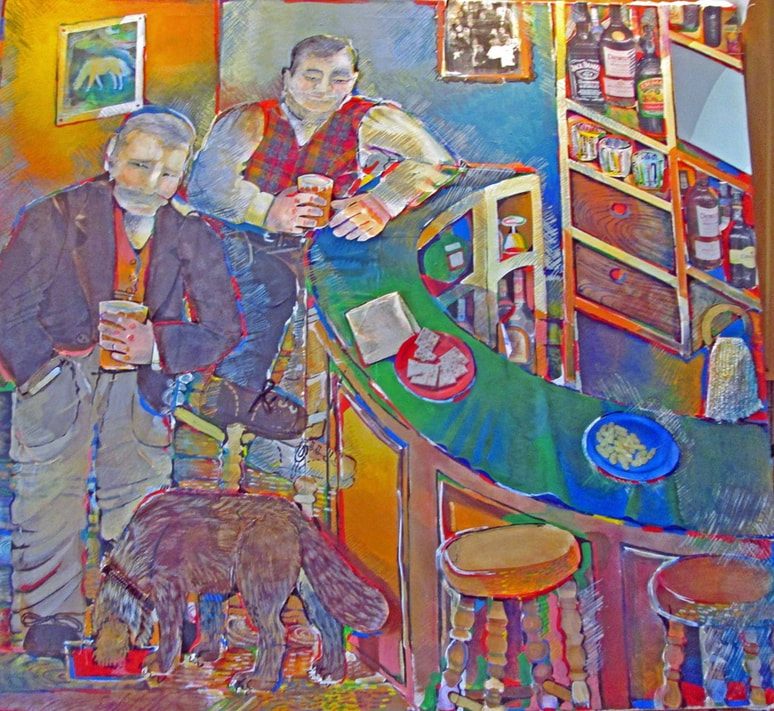 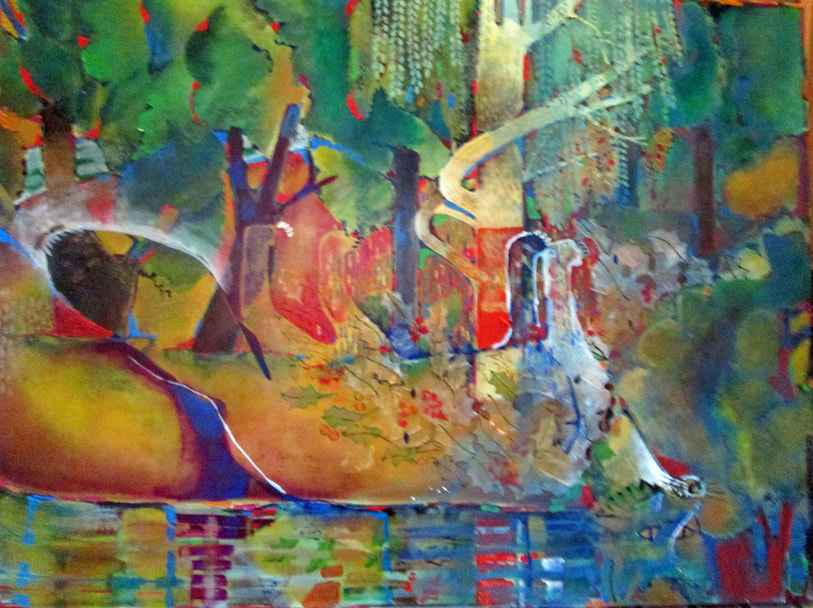 Stephen's answer to his students when he gave them a riddle: "A fox burying his grandmother under a hollybush." 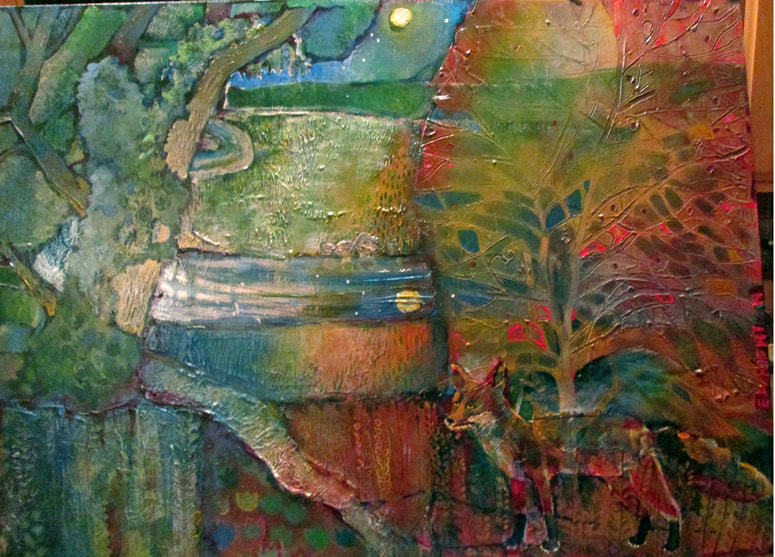 ​
Beneath Winking Stars a Fox
acrylic on canvas
dimensions: 30x40"

"She was no more: the trembling skeleton of a twig burnt in the fire, an odour of rosewood and wetted ashes.  She had saved him from being trampled underfoot and had gone, scarcely having been.  A poor soul gone to heaven: and on a heath beneath winking stars a fox, red reek of rapine in his fur, with merciless bright eyes scraped in the earth, listened, scraped up the earth, listened, scraped and scraped."

~ Ulysses
​__________________________________________
Painting alongside of images from James Joyce has been a very different ride.  It has expanded my horizons!  Less pastoral and rural...more surrealism, cubism! Walls become transparent and planes shift...... Heavy collage!  More interiors, more human folk, more pushing of the boundaries.  One large painting {the dog in the pub, i.e.} is not on stretcher bars at all!  The canvas of Garryowen the dog in the pub (above), hangs like a large tapestry or a gigantic piece of paper on clips.  I really like it.  Whoever eventually owns it may frame it of course, which would be incredible too...even matted, with a white border around it, like a giant print!  That will be up to them.  But as is it looks very primitive, very strong and undomesticated!!! 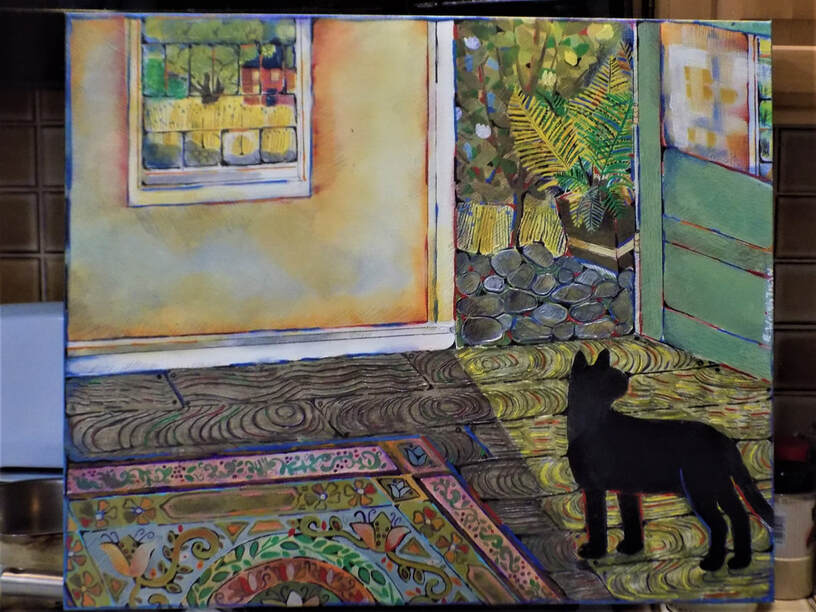 "Old and secret she entered from a morning world, maybe a messenger......" 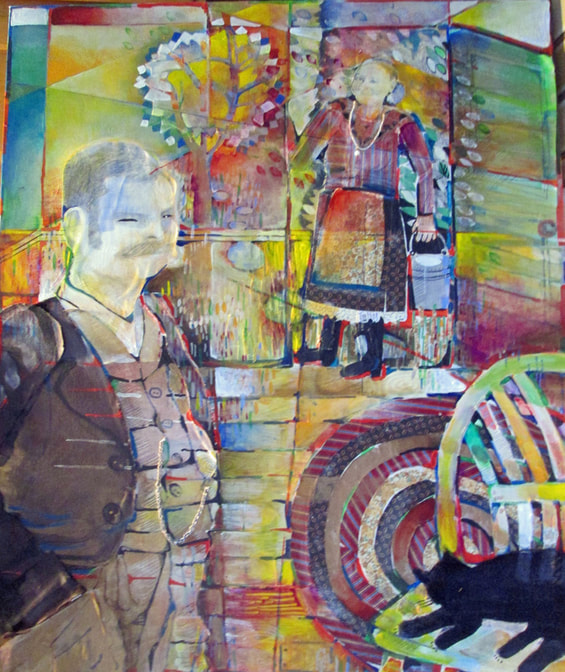