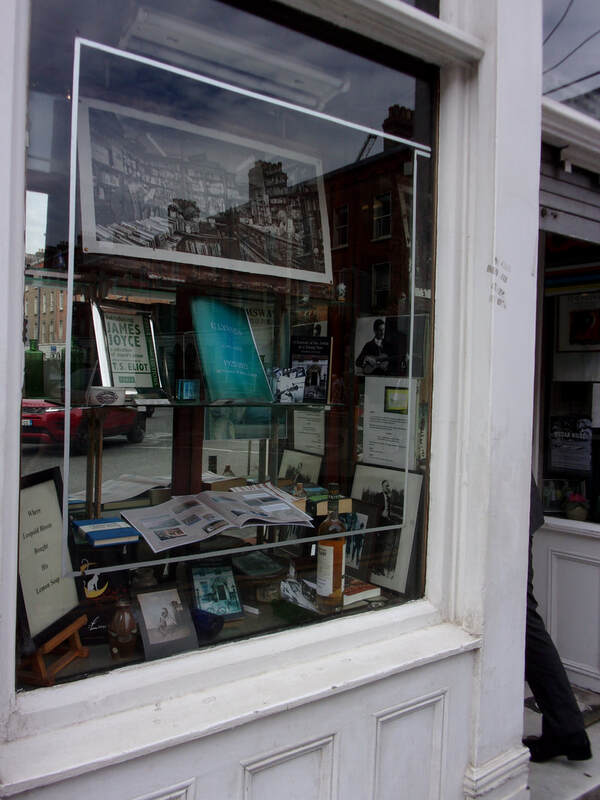 Sweny's Pharmacy,
Dublin, Ireland
preserved as it was 100 years ago in Ulysses, by James Joyce 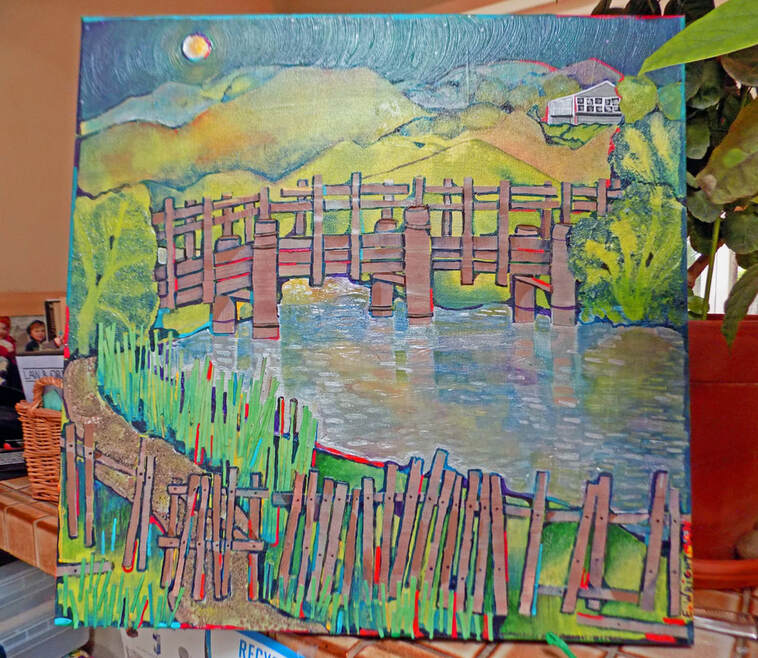 property of local collector
title: the Spirit and the River
​
BELOW

"Come heart, where hill is heaped upon hill:
For there the mystical brotherhood
Of sun and moon and hollow and wood
And river and stream work out their will;"

W. B. Yeats
excerpt from Into the Twilight 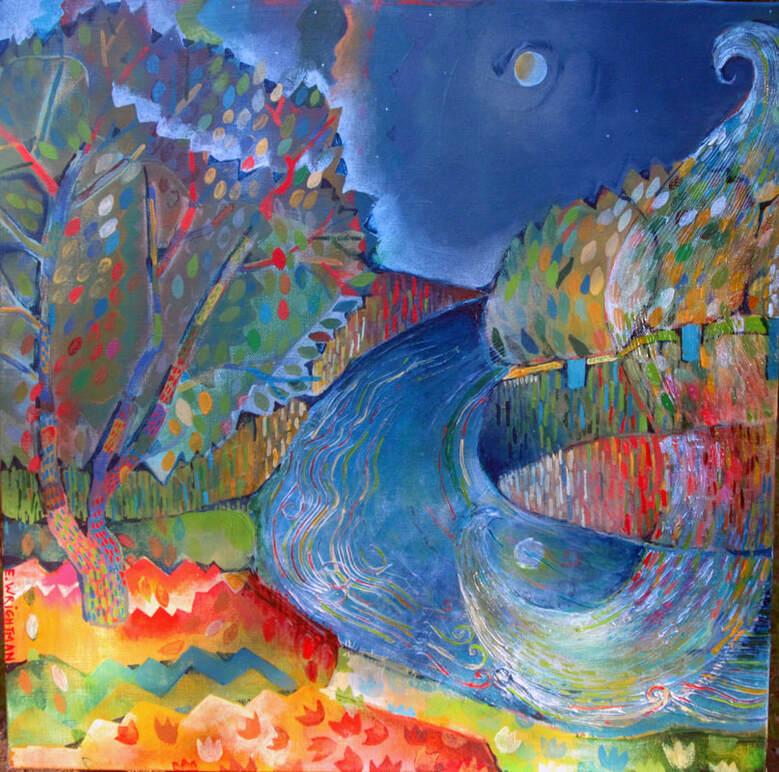 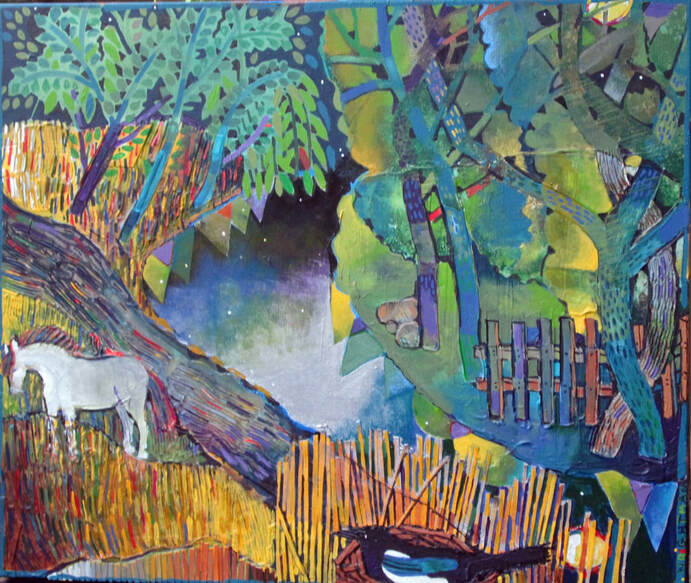 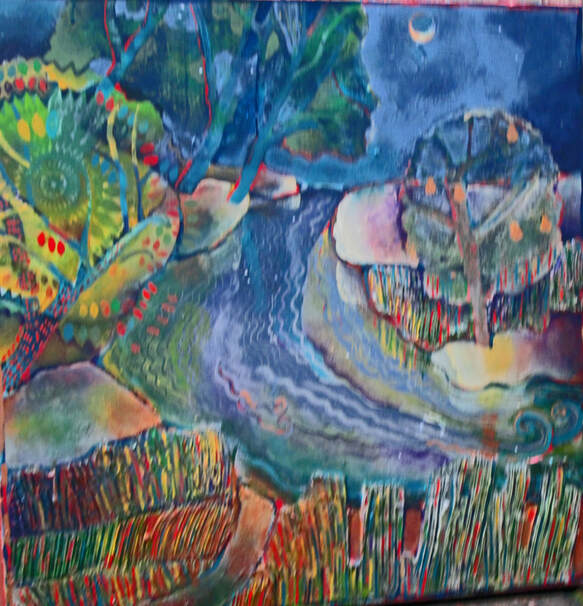 "He was standing under a bush one time, and he talked to it, and it answered him back in Irish.  Some say it was the bush that spoke, but it must have been an enchanted voice in it, and it gave him the knowledge of all the things of the world."

~The Celtic Twilight :Faerie and Folklore 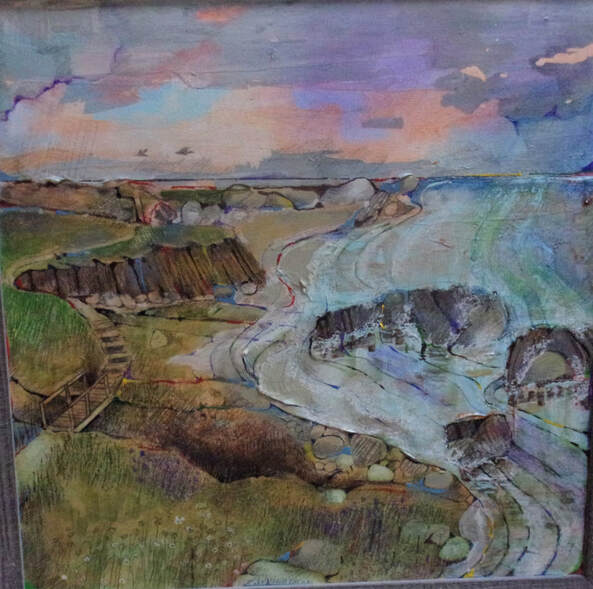 On Sandymount Strand
"A cloud began to cover the sun slowly, shadowing the bay in deeper green."
from Ulysses by James Joyce
dimensions: 20x20"
medium: Acryics and pencil on canvas
date: 10/22
on indefinite loan to Mrs. Dorothy Scardina, Carmel, CA 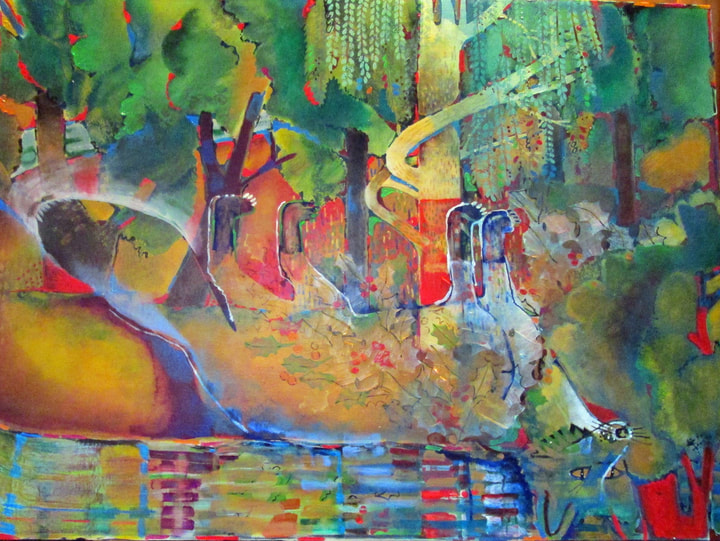 "The Celtic speaking peoples appear to share a common view that there are several layers to reality: the ordinary world and another reality, where other beings exist that might easily make their way into everyday life.  It is possible to cross from the ordinary world into the otherworld.  Celtic stories often take great pleasure in this shifting reality, using animals and birds to indicate the supernatural."

~ {The white stag in Celtic myth is an indicator that the otherworld is near.  They were considered to be messengers of the other world.  And to Christians, as time passed, the white stag came to symbolize Christ.} 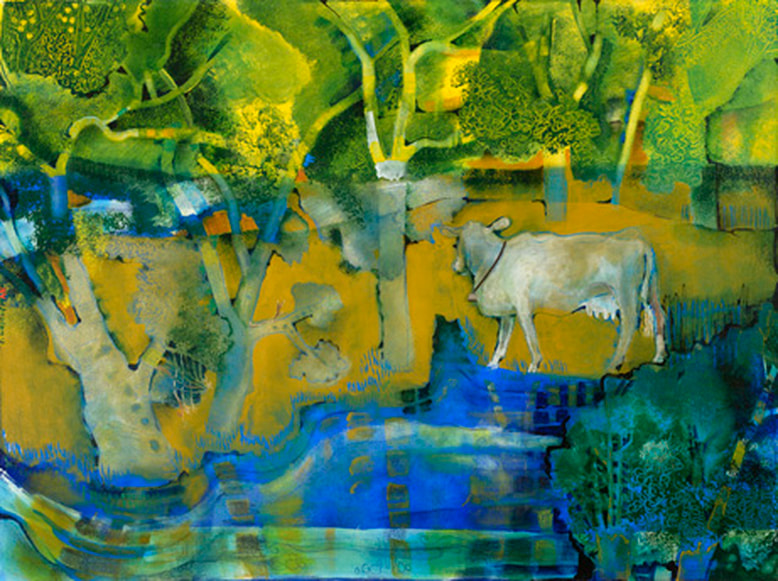 ~excerpt from The Fairy faith in Celtic countries

"Now it was a bright light, now it was letters of fire that vanished before they could be read, now it was a heavy foot moving about in the seemingly empty house.  One wonders whether creatures who live, the country people believe, wherever men and women who lived in earlier times, followed us from the ruins of the old town?  Or did they come from the bank of the river by the trees where the first light had shown for a moment?"

Finally it is the power to create worlds that matters.  "Under the guise of civilization, under the pretext of progress, we have managed to banish from the mind all that is called, rightly or wrongly superstition, imaginings; to prohibit any kind of inquiry into truth which doesn't conform to common practice." 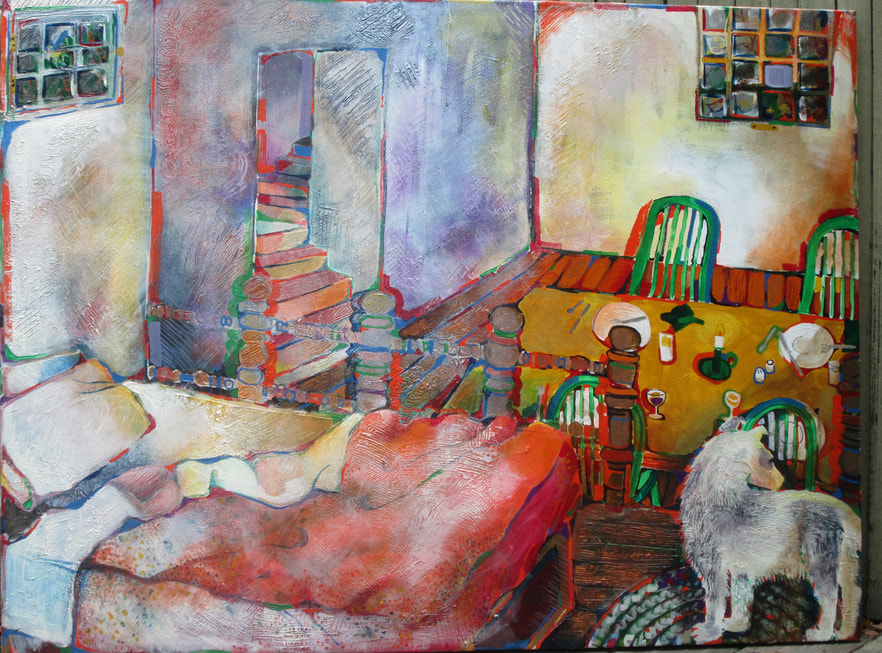 (paintings in a series of 20 works, for scheduled solo exhibits  in Carmel, CA and at Mercy Retreat Center in Burlingame, CA by Elizabeth Wrightman): elizabeth@wrightman.us
These 10 paintings of a body of work which I began in 6/12, are all based on ancient, leading up to contemporary Irish storytelling, poetry and literature.  And #10, Elemental Beings from William Butler Yeats poem, To Ireland in the Coming Times can be seen immediately above

{owned by the artist and her husband, Paul}

painting [ pictured two below] is Unhurrying Morning Donkey
~ from Flann O' Brien's novel the Third Policeman
48x36"
acrylic on canvas
"The earth was agog with invisible industry.  Trees were active where they stood and gave uncompromising evidence of their strength.  Incomparable grasses were forever at hand, lending their distinction to the universe.  Patterns very difficult to imagine were made together by everything the eye could see, merging into a supernal harmony their unexceptionable varieties. ----Birds were audible in the secrecy of the bigger trees, changing branches and conversing tumultuously.  In a field by the road a donkey stood quietly, as if he were examining the morning, bit by bit unhurringly.  ---He looked as if he understood completely these unexplainable enjoyments of the world. "                     ~ Flann O'Brien 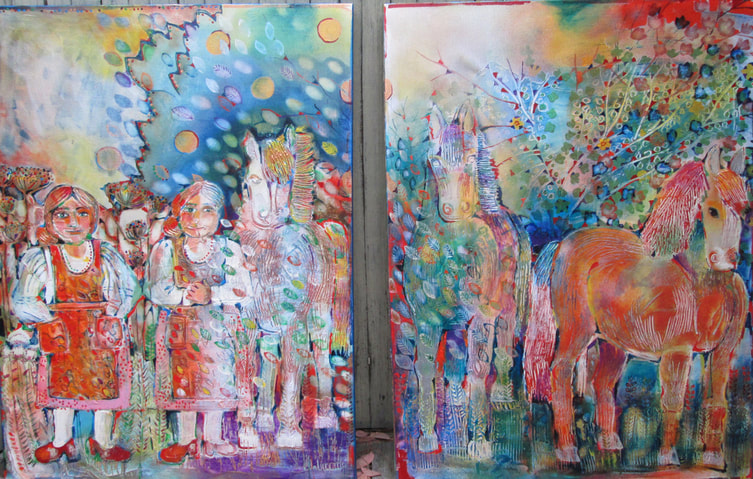 A woman that Ran Swifter Than a Horse

acrylic on canvas
sold
These two, immediately above, were inspired by the following Irish visionary experience: "I myself, when I was a boy of ten or eleven, was perfectly convinced that on a fine dewy morning in summer when people were still in bed, I saw a strange horse run round a seven-acre field of ours and change into a woman, who ran even swifter than the horse, and after a couple of courses around the field disappeared into our haggard.  I am sure, whatever I may believe today, no earthly persuasion would, at the time have convinced me that I did not see this.  Yet I never saw it again and never heard of anyone else seeing the same."

~ the Fairy Faith in Celtic Countries
W.Y. Evans Wentz
acrylic on canvas
sold
[ image of the horse on the right became part of a print I made recently called Lucia's Pony ] 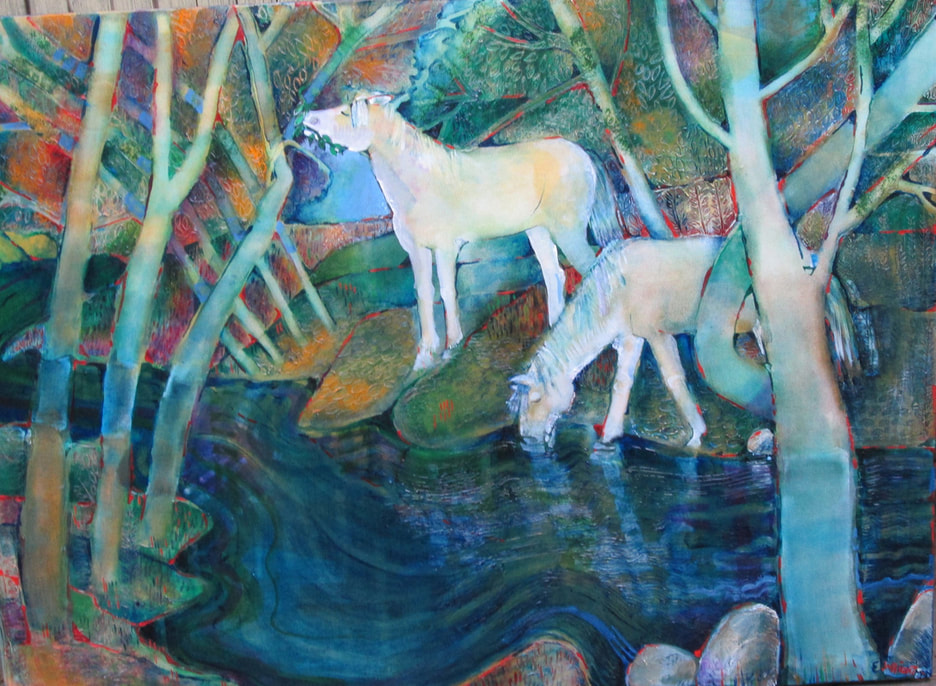 Horses at the River 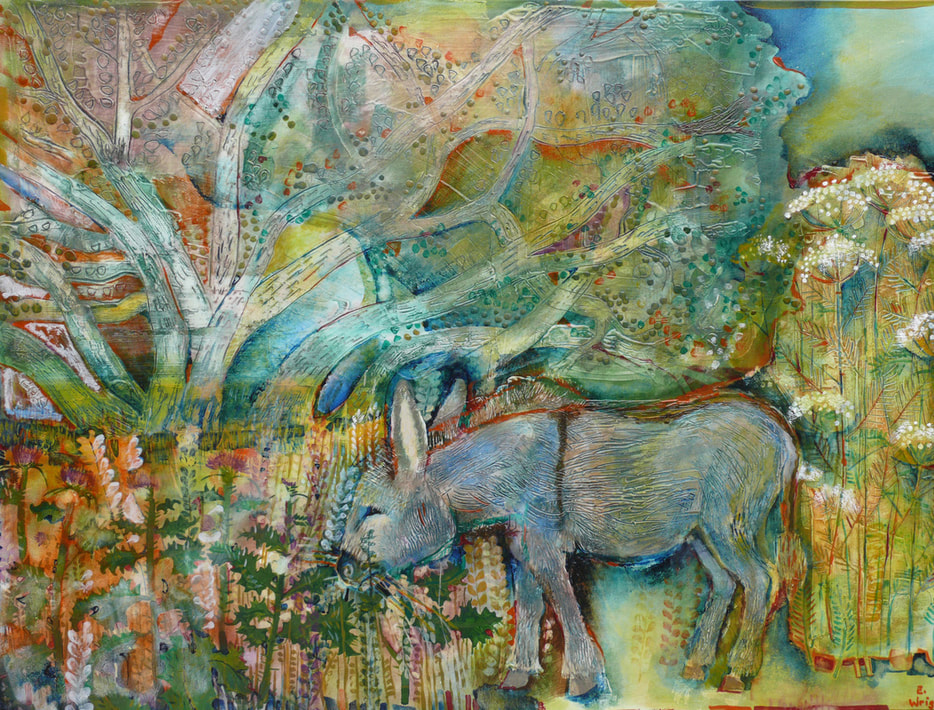 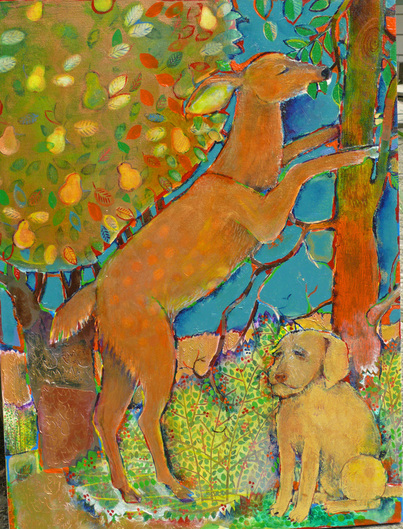 I am a Hound for Thornypaws;
I am a Doe for Swiftness


​
I am a painter living in Carmel, Ca., working mostly at present from images in  Irish poetry and related texts : Present work particularly influenced by the writings of Carl G. Jung,  Joseph Campbell, Mircea Eliade, William Butler Yeats, Robert Graves, Flann O'Brien, numerous anonymous poets, my own Celtic heritage and a  visit to Ireland, in part for the purposes of this series...
(​ps         James Joyce) 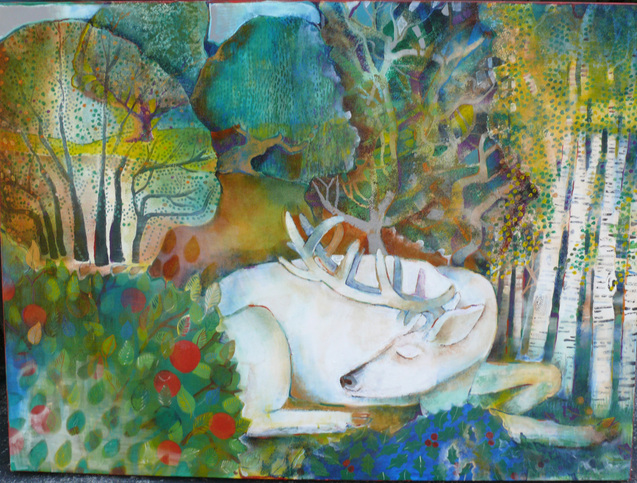 "I am a stag of seven tines"     - the first line of the Song of Amergin ;( possible date, 1268 BCE.)  This ancient poem is credited in legend with being "the first poem spoken in Ireland"
in this painting inspired by the poem, the white deer hides in a grove of 7 magical trees:  apple, holly, birch,oak, willow, alder and hazel
48'x36'
acrylic on canvas
now in private collection 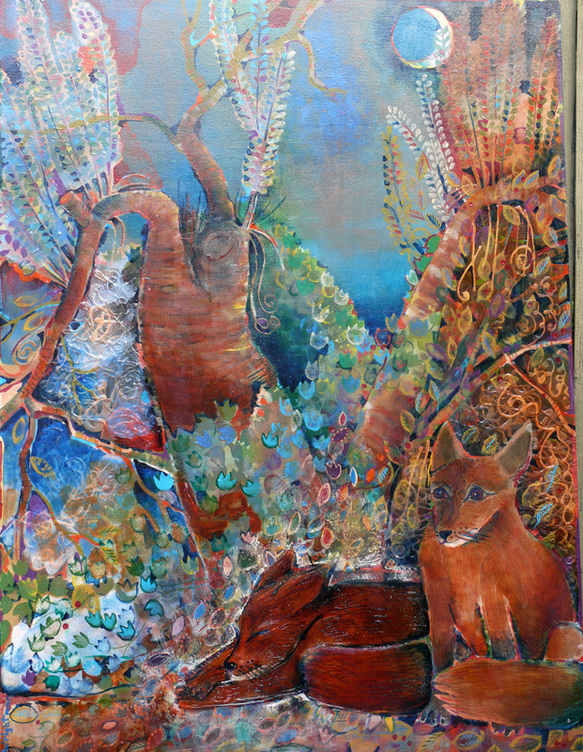 from the Irish poem King and Hermit
~10th c. 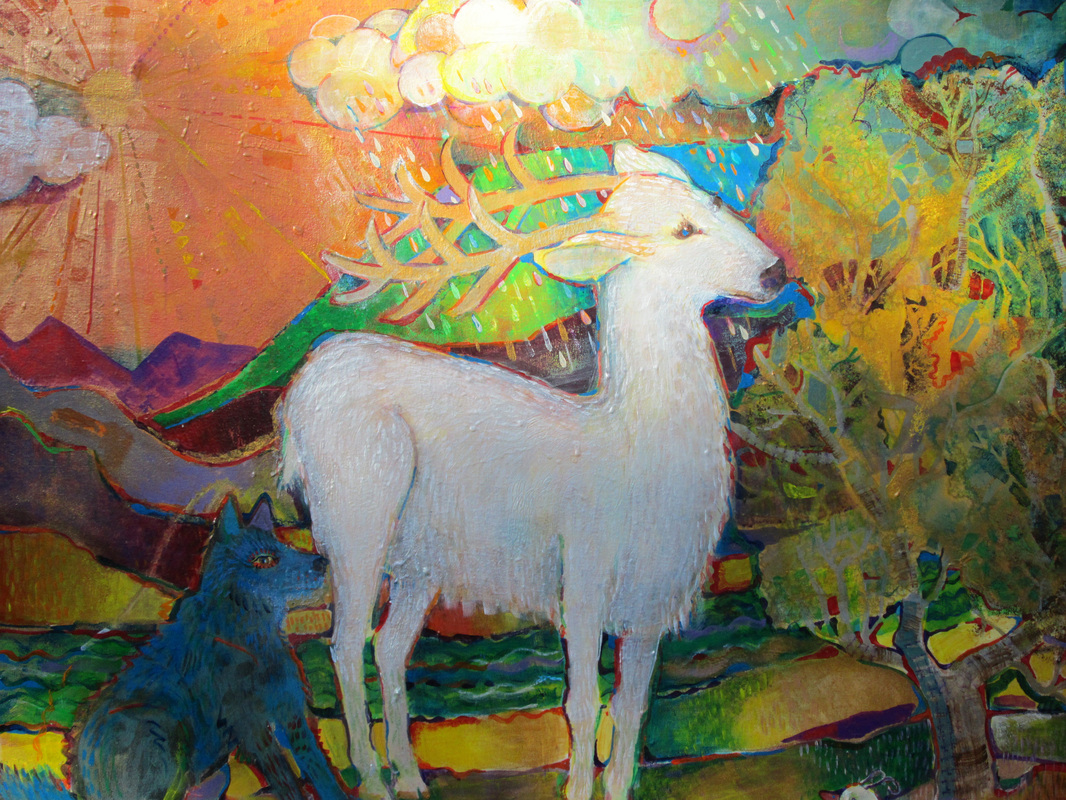 the White Stag is hidden in a sacred grove of apple trees
dimensions: 48x36"
medium: acrylic on canvas
painting is from a dream
​Philadelphia, PA 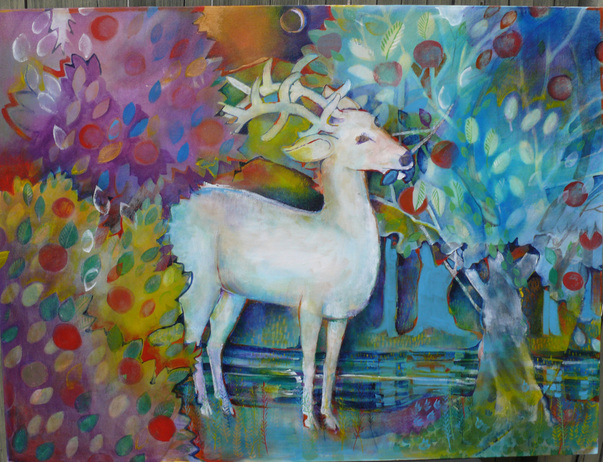 ​......The top of the green oakwood is bushy,
Summer has come, winter has gone,
Twisted hollies wound the hound.

The blackbird sings a loud strain,
To him the live wood is a heritage,
The sad angry sea has fallen asleep,
The speckled salmon leaps.

The sun smiles over every land----
A parting for me from the brood of cares:
Hounds bark, stags tryst,
Ravens flourish, summer has come!

~ excerpt from Summer Has Come {circa ninth century}


(see below): The Hound, the Salmon and the Raven 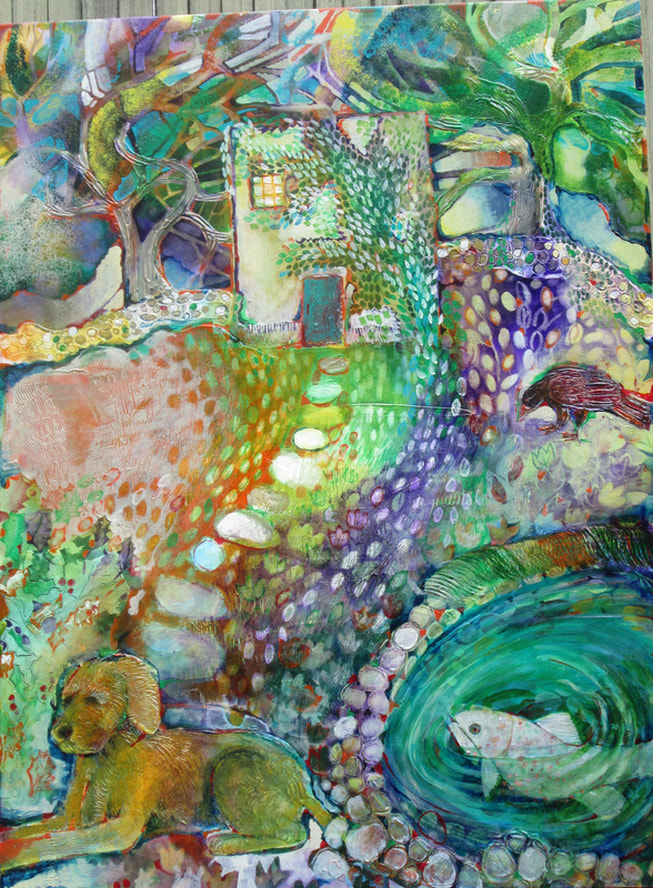 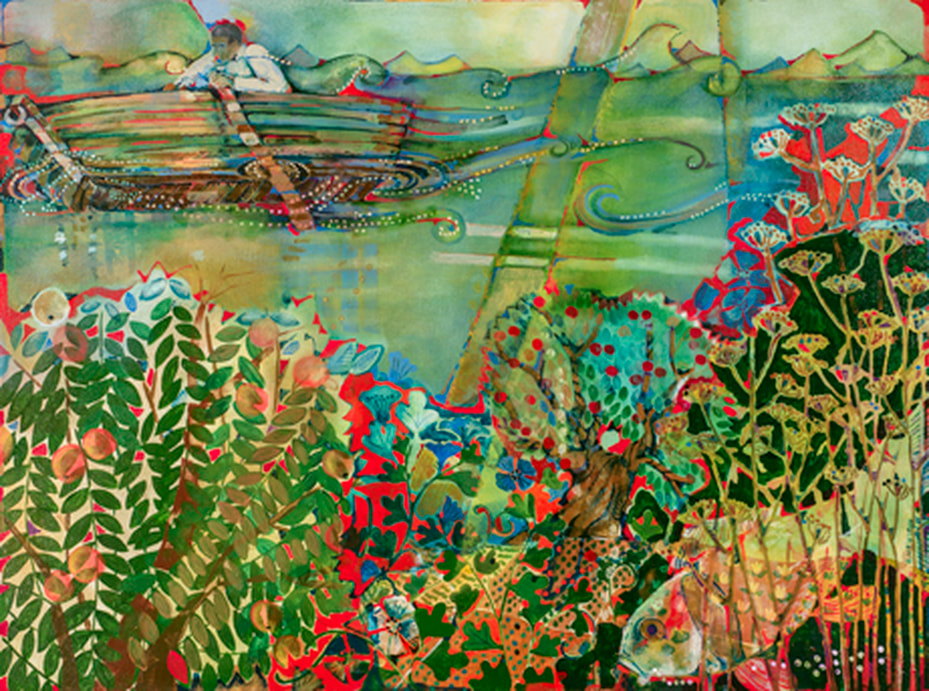 "Bran finds that it is marvelous to cross the bright sea by boat, while for me---it is a blossoming sea over which he rides.---It is in the tops of the trees that your boat swims, crossing the heights:  There is a woods filled with very beautiful fruit under the prow of your little boat, a woods with flowers and fruits which neither fades nor fails, where the leaves are the color of gold."

{This painting is renamed by the artist, Reaching Safe Passage and is no longer about the legend of Bran, in the mss quoted above but is dedicated to a loved one presently recovering from illness.....}
acrylic on canvas
48x36"